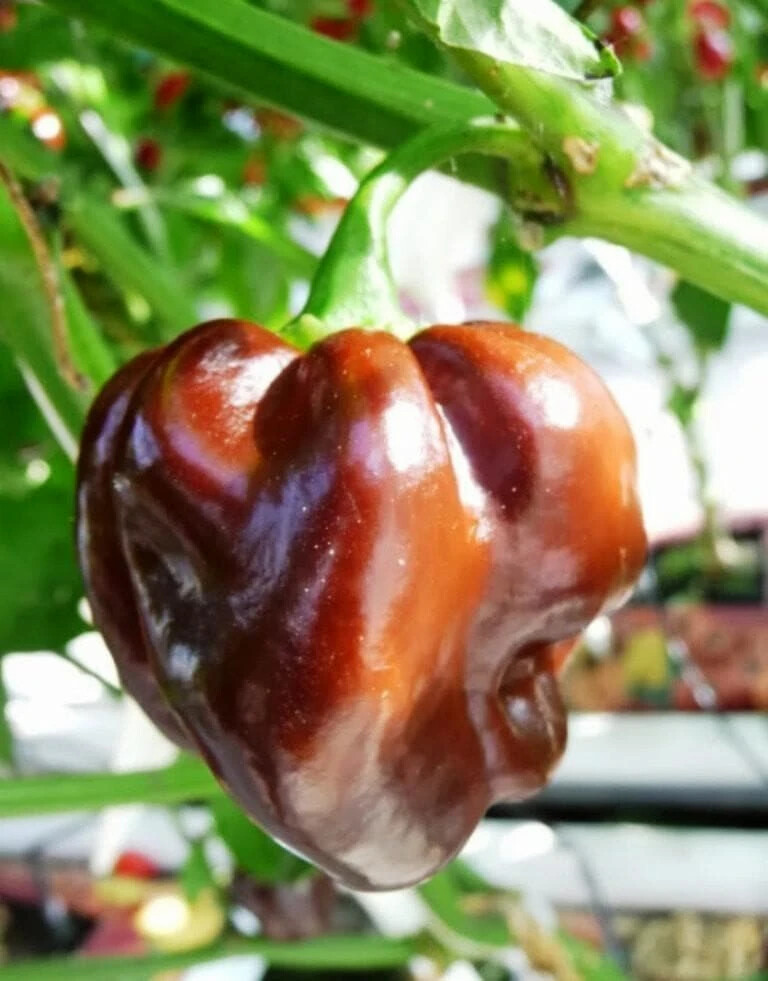 THE SEEDS ARE FROM Plants that were grown of seed that came from JAMAICA !
This is real Chocolate Scotch Bonnet not CHOCOLATE Habanero that others try and pass off as Scotch Bonnet. Fresh organic Heirloom seeds, -32,500 Scoville.

One of the hottest peppers !

Scotch Bonnet's,32,500 Scoville,are one one of the hottest pepper in the world !
Its the secret ingredient in the famous Jamaican Jerk Sauce !!!
Great for homemade hot sauce, a little bit goes a long way.
Chocolate Scotch Bonnets are a heavy producer.
The germination rate of these seeds is 85%.
Easy to grow !!
These seeds have been germination tested and have been grown organically
Instruction

Pepper varieties come from tropical humid regions. The temperature, moisture, and air circulation all play a role in growing plants from seeds. Too little heat, too much moisture, and lack of air circulation will cause poor results. Do not use jiffy peat pots, plugs, or potting soil as the soil becomes too dry or too wet, which can lead to disease and fungus. Use Organic Seed Starting Material for best germination results.

At Planting Time:
Plant your peppers with a good shovel full of compost in the planting hole, and then give them a good dose of compost tea every few weeks for the first 6 weeks of growth. Also, mulch around each of your pepper plants with a good 1 to 2 thick layer of compost.

Peppers often like to take their sweet time germinating. They can be up in a week, and some will take almost a month. Even with paper towel germination testing, they can take a long time. I am not sure why, but it is a normal occurrence. So plan and make sure you start them early enough! Also, remember they like heat to germinate so make sure you have a heating mat or something to keep the soil warm. Placing them up on top of the fridge often works too since it is normally warmer up there.

Please careful with these seeds as they are very hot and so keep your fingers away from bodily membranes such as eyes and nostrils.

Save this product for later
Display prices in: CAD